Published in January 28, 2007 in The Seattle Times 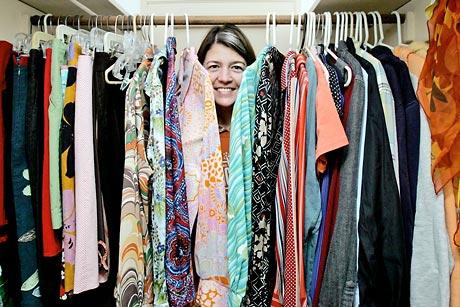 After a frisson of dread, I felt mostly relieved that help was on the way. My port-o-potty sized closet was jammed full of “great finds,” many of which I hadn’t worn in a year (OK, years). I held onto this clothing nonetheless, thinking there might come a time when it would be just the thing. And when that urgent call came for, say, a stretchy silver lamé tank top purchased circa 1993, I’d be ready.

I heard about Susie from my friend Nancy, who had recently hired her, and who described the experience in tones both thrilled and shell-shocked. “She goes through everything,” Nancy said, “including your sock and underwear drawers.” I cringed as Nancy continued her debriefing. “She’s blunt, she moves quickly and shoves the rejects into big black garbage bags.”

The image of my possessions suffocating in Hefty sacks was harrowing, but I was hooked. I knew my situation was dire: Pants and skirts were piled two and three per hanger, shirts were not so much “hung” as “compacted,” and countless folded items of mystery climbed toward the ceiling in teetering piles.

“It’s an emotional process, very intimate and personal,” she said of her closet-rehab service. “But it’s such a great self-esteem boost. With the right fit, people can look 10 years younger.”

Susie made clear that “fit” is of crucial concern. “People need to learn what a great fit is. One of the primary reasons you don’t wear things is because you know they don’t fit. But it was on sale or you needed something in a hurry, and then it stayed in the closet for the rest of your life.”

I nodded on my end of the receiver; apparently she’d dealt with my kind before.

“The Dalai Lama says your stuff starts to own you,” Susie continued. “The more stuff you get rid of, the better you feel. It’s such a cleansing.” I wasn’t sure about taking fashion advice from a man who dressed solely in maroon and gold sheets, but I found the vision of a Zen closet quite soothing. A regular volunteer at Dress for Success (the nonprofit that helps underprivileged women entering the work force find business-appropriate clothes), Susie added, “The thing is, your old clothes are just hanging there, and somebody else could really use them.”

As our meeting date loomed, I told more and more friends that a stranger would soon be coming to my house and hurling my clothes into garbage bags. Without fail, the first question everyone asked was, “What happens to the bags?”

I explained that Susie leaves the bags so clients can “grieve the clothes,” but she strongly encourages donations or consignment — and quickly, to resist the temptation to claw though them in the middle of the night like a raccoon.

My friends were oddly protective, saying things like, “What if she tries to change your style?” and “Don’t let her get rid of your funky stuff,” and “What does she know, anyway?” Soon I became defensive myself, enough so that I sent an anxious e-mail to Susie with my concerns (“I get bored bored bored with neutrals!” I panicked).

Her response was calm and collected. “I try to be really conscious of what the individual’s style is. I don’t have any rules because every person is a little different. Most people already know what they should get rid of, they just need someone to push them. Sometimes I just stand there and hold the bag open.”

When at last Susie arrived, I was relieved to see that she looked sharp yet funky, wearing perfectly fitted jeans and a vintage faux-fur coat. We proceeded to my bedroom where she lined up her supplies (bottled water and garbage bags) and dove in.

We started with my large collection of patterned polyester shirts from the ’70s. To my surprise, she said, “These are great! Great splashes of color.” She laid them on the bed, all 12 of them, and directed, “Let’s pick your favorites and get rid of the rest.”

Spreading them out this way made it instantly apparent which ones I rarely wore because they were ill-fitting or just not right. I cut my collection by half and the first bag began to fill.

For the next three hours, the bags continued to fill. Susie was indeed blunt — the process is not recommended for overly sensitive types — but she was also quite funny and genuinely helpful. The more she unearthed, the more I realized how much I needed her.

Prompted by Susie’s insistence that everyone should have a great pair of basic black pants, I pulled out some slacks I hadn’t worn in years, but had always assumed would fit this bill. Susie looked skeptical. “I’m going to need to see those on you,” she said. As I pulled them up (and up and up) I was shocked to realize how high waisted and horribly out-of-style they were. “Wow, I guess these are pretty old,” I said, the pants rising ever closer to my neck. Susie widened her eyes and said, “On the plus side, you wouldn’t have to wear a shirt.”While I fought for a few items, trying each on as proof of their fit, most everything she tossed into the bags was a huge relief to be rid of. Her running commentary made it seem suddenly so obvious.

When I opened the drawer bulging with socks acquired since 1986, she said, “Why are you keeping all of these? Did you live through a world war?” All but four pairs went into the bags.

A handful of old bras with elastic sprouting like alfalfa earned Susie’s trademark “silent scream.” And a place in the bags.

In the end I had 14 garbage bags piled in my living room, approximately 60 percent less clothing, and a new lease on life. My closet was clean and organized. The shelves were empty, save for my gym bag. The floor was entirely visible. Even the bar was visible beneath the hangers, all of which were the same color and held only one item of clothing. Before, getting dressed had been stressful — I had too many (poor) options, plus, I could barely see them. But now I could see what I had, and it was good.

The next day, I sent a follow-up e-mail to Susie. “It’s so liberating!” I enthused. “I have no desire to look into the bags again … except maybe for some socks.” The night before I had heard the siren song of old socks and while I resisted, I felt compelled to confess my raccoonish desires. Susie e-mailed right back: “Step away from the sock bag. You’ll be fine.”