During the first months of owning our new house, which we purchased in the spring of 2010, my husband Daniel and I told our story over and over—a gripping tale concerning the condition in which we found the place.

We told people about the previous owner, who’d neglected the house to the point of serious, Grey Gardens-level disrepair, who shouted, “I hate this house!” at us on the day we picked up the keys. We spoke of the standing black water filling the kitchen sink. The broken dishwasher stuffed with garbage. The raccoons so accustomed to being fed they knocked with black, infantile fingers at the kitchen window each morning, demanding breakfast.

But mostly, we talked about the smell. A sour odor permeated every room, becoming more intense when the heat was on. We tore down filthy curtains, we refinished the wood floors, we painted all the walls. But the stench remained. We called in a heating service to clean the ducts. The workers said they’d never removed so much dirt and animal hair. But the smell persisted. We called a second heating service, to no avail. We made visiting friends sniff the air, asking, “Do you smell that?” They politely answered, “Not really.” Finally, Daniel persuaded an unlucky technician from a third heating company to dismantle the gas furnace itself. Lodged inside was a mummified cat. The poor creature had run down into the vents at some point (many of them were missing grilles) in pursuit of six mice. The scene was easy to reconstruct, as the mice were mummified there too, all frozen in time like a Natural History Museum diorama, hair and eyes intact, bodily fluids drained and stuck to the heating coils. Yanking the cat’s stiff body out of the heater felt like an exorcism.

Why on earth, people asked upon hearing our story, did you buy the place? The answer was simple: The courtyard. 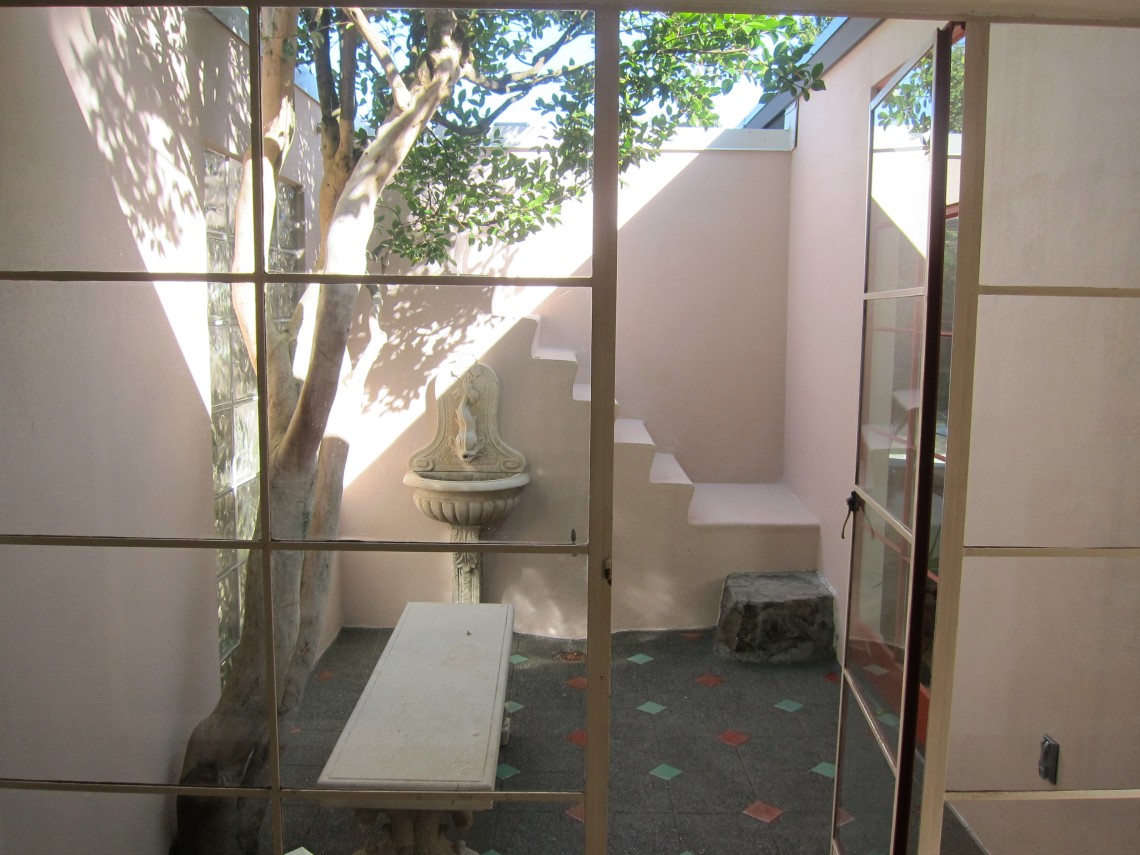 Built in 1939, the house is a square, one-story brick bunker, hole-punched in the center by a small, square courtyard open to the sky. (A 1950 Better Homes & Gardens article about the house was titled “A House with a Hole in the Middle.”) Glass panes comprise two of the courtyard walls, with doors opening onto the enclosed outdoor space. The third wall is made of glass brick. The fourth wall contains a single flight of stairs leading up to the flat roof. A camellia tree grows out of a gap in the concrete patio, its leaves spreading greenly above the house. Looking into the courtyard—which can only be seen from inside the house—is like gazing into a human-scale terrarium. It rains in there. It snows. Sun pours in and lights up the surrounding rooms. The moon passes over and casts a gentle blue glow.

We clung to the courtyard during the depths of our buyers’ remorse. (Among other post-purchase revelations: a damp-wood termite infestation and an army of desiccated rats in the bedroom ceiling.) We knew the courtyard was cool and a big reason the compact house functioned so well—everything seemed to orbit effortlessly around it. What we didn’t know until later was that this physical emphasis on bringing the outdoors in was a signature design element of the house’s architect, Paul Thiry, aka the father of Northwest Modernism.

Coincidentally, Thiry had a pivotal dead cat story of his own. In a 1983 oral history interview for the Smithsonian Institution, Thiry revealed that while he started at UW in their pre-med program (in 1920), one fateful day the combination of hot weather, a lab with closed windows, formaldehyde fumes and the stench of a half-dissected cat was enough to make him switch to architecture. Seattle can thank that malodorous afternoon for such prominent buildings as the Frye Art Museum, KeyArena, MOHAI, St. Demetrious Church, and, less prominently, our house.

In the late 1930s (long before he became principal architect of the Seattle World’s Fair), Thiry designed a handful of Seattle homes – including ours – in the International Style. In a Smithsonian interview he lists hallmarks of this style as “flexible planning and windows and environmental considerations of siting, of the climate, of view. … Things of this kind, which were not considered, really, in the buildings that were being built at the time.” Trained in the history-adoring, Beaux Arts style, Thiry’s eyes were opened wide to this new architectural approach during his travels to France and Japan in the mid-1930s. Upon his return to Seattle, he began employing these principles of the modernist movement—but as this was before modernism became all the rage, he received a great deal of criticism. “This was all new and strange to a lot of people,” he explained.

Learning about Thiry over the last year has changed our story. Now the tale we tell about our house is how smartly it was conceived—how big it feels despite its modest size. How it flows. There’s a musical movement to the way the light shifts through the rooms. The kitchen faces east, receiving the morning light. In the evening, as we’re winding down, the setting sunlight is refracted by the glass-block wall in the living room. This was no happy accident. It’s the materialization of Thiry’s residential design philosophy: “I thought of the moon and the shadows it would make,” he said. “You think of gray days, you think of rain…as an atmosphere. You have to think of shadows different objects cast—the leaves, the branches of the trees. … And if you design a room with the full consideration for all of the aspects of the environment, why, you don’t really design one room, you design a thousand rooms within a single room.” This is the story he built into the bones of our house. We read it every day.

Brangien Davis is the arts and culture editor at Seattle magazine. Previously, she has been a freelance writer (The Seattle Times, ReadyMade), writing teacher (Richard Hugo House, Seattle Central Community College), book editor (Sasquatch Books, Mountaineers Books), managing editor (Amazon.com) and founder/editrix in chief of a literary magazine (Swivel). Her creative writing has been published in the journals Swink, Filter and Rivet.

Here are some more pictures of Brangien & Daniel’s house.

Leave a Reply to heather b. Cancel reply