On a sweltering day in June, Jerick Hoffer is carefully stretching a second pair of nude-colored dance tights from his toes up to his waist. The Portland-raised, First Hill–based drag performer customarily wears four pairs of these thick pantyhose on stage, plus a couple of Spanx undergarments to make his form more feminine. But for today’s photo shoot at Cornish Playhouse, he’s taking it easy—even letting someone else do his makeup, a task he usually tackles himself over the course of two hours. He’s happy with the results. “I love it!” he says. “I look like a male Lady Gaga.”

Hoffer, 25, has a special genius for shape-shifting. His most famous drag persona is Jinkx Monsoon, a 40-something single Jewish mother (with narcolepsy) just trying to make it in show biz. A regular performer in the Le Faux show at Julia’s on Broadway on Capitol Hill, Hoffer gained a national fan base this year on the reality show RuPaul’s Drag Race—which he won. His performances stood out for being quirkier, brainier and funnier than the other contestants—including a spot-on imitation of Little Edie from Grey Gardens that killed the audience (and mystified his competitors, most of whom had never heard of Jackie O’s kookiest cousin). 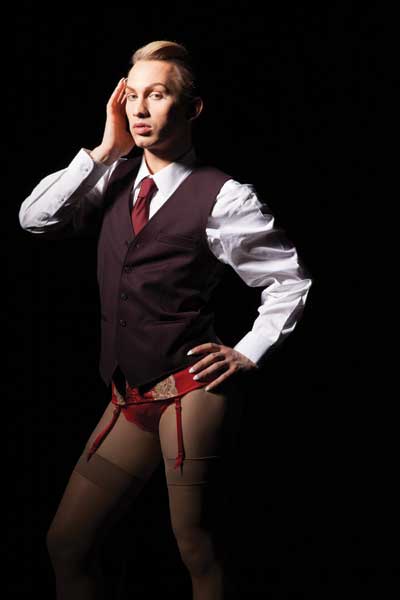 Humor is what makes Hoffer’s work so endearing. When he studied ballet in school, he says, he was always given the comedic roles (“I wasn’t afraid to go big”). In addition to the hilariously sassy Jinkx, in the last two years Hoffer has played the lead role in the rock musical Hedwig and the Angry Inch with Balagan Theatre; written (with Keira McDonald) and performed a one-woman show, Turning Parlor Tricks, about a transsexual psychic medium who channels dead celebrities; played Velma Von Tussle in The 5th Avenue Theatre’s concert version of Hairspray; and this summer, starred in seven weeks’ worth of sold-out off-Broadway performances of The Vaudevillians, a cabaret show he began developing with musician/composer Richard Andriessen while at Cornish. In the latter, Hoffer plays Kitty Witless to Andriessen’s Dr. Dan Von Dandy—she’s a sex kitten, he’s a closeted gay man—two 1920s vaudeville performers who were accidentally frozen alive. Thanks to global warming they’ve thawed out, only to discover that their songs have been ripped off by modern-day performers (“Drop It Like It’s Hot” was theirs, about the invention of the electric iron).

Hoffer’s dream goals are to be the first replacement for Neil Patrick Harris in the new Broadway run of Hedwig, and to be the first drag host of Saturday Night Live. But for now, his Drag Raceacclaim has him running—in heels—from one stage to the next. “I’m thankful for the reality TV show notoriety, because performing is what I’ve wanted to do my whole life,” he says. “Now that I’ve got people’s attention, I’m pretty confident I can keep it.”